Magic is Calamia – and the essence of magic exits in everything, from the smallest living creatures to the largest.  This essence is called velanil. Velanil is the soul of everything that exists, living or not. Without velanil nothing would exist.

Until an individual reaches magical maturity they will not know they are a magus or have access to their velanil. The age of maturity will vary depending on the individual’s race. 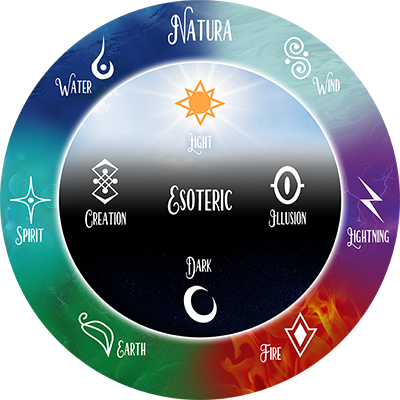 There are two fields of magic – Natura and Esoteric.

Natura types allow the caster to use their velanil to create elemental magic. These include Earth, Fire, Wind, Water, Lightning and Spirit. The Natura spell types are physical types, where they already have a natural form in the world. These types are also linked to Calamia itself, and as such are deemed ‘of the world’ magic.

Esoteric spells are incorporeal – they have no true form, and rely upon the caster to create their form and application. That is why out of all the magic types, Esoteric are the more challenging to study.  These types include Light, Dark, Creation and Illusion.  Esoteric types are linked to Calamia and the Gods.

A Magus’ magic type is not their decision – their velanil decides for them.  When they reach magical maturity their magic will chose its paths.  Like a newly formed river, it will flow in the direction it chooses regardless of what an individual might want. They will either have ability in one or two Natura types, one Esoteric, or one Natura and one Esoteric. Regardless, a Magus will only ever know one or two magic types, and never more than one Esoteric type.

All magic comes at a cost, and each time a caster molds a spell they are using their velanil. Velanil is their life source, their essence. Each person has a velanil pool. Some individuals have larger, deeper pools of velanil than others, and this will give them more longevity in spell casting.  That’s why some people can cast many of the same spell while others can cast only a few of the same. Not everyone’s velanil pool depth is the same. There is also skill level that plays into magical power and prowess. The more a Magus has studied and developed their skill the better they are at forming their link with their velanil.

Think of this link as a bridge between the individual and their velanil. In the beginning, when they first gain access to their velanil, this bridge is made of glass, and can easily break if not tread lightly. As a Magus grows in experience and skill they are learning how to better fortify their bridge and more efficiently access their velanil.

However, a Magus’ bridge will never be impervious. Every time a magus casts a spell they are spending their velanil and wearing out their bridge. The more a Magus uses, the more they force across, the more it deteriorates their bridge and depletes their velanil pool. This drain and wear will cause fatigue and eventually exhaustion.

In order to recover their velanil pool all Magus, regardless of ability, must rest.

There are times, however, when a magus skirts the limits of their velanil pool or the strength of their bridge. This is referred to as “Magi-Drain”. The effects of Magi-Drain are not lethal, but will leave the magus in a severely weakened state until they have rested for at least a day to allow their body to fully recover. The usual signs of Magi-Drain are: a rapid decrease in body temperature, cold sweat, uncontrollable shakes, extreme fatigue, muscle spasms, blurred vision, dizziness, nose bleeds, nausea, vomiting, confusion and unconsciousness.

A Magus can never fully expend their velanil pool without disastrous and/or deadly consequences. When a magus loses too much velanil their body – unable to handle the tremendous strain – will begin to burn away at an accelerated rate. This is called “Magi-Burn”. The effects of Magi-Burn are usually severe and quick. For those that do survive, the bridge to their velanil crumbles and is destroyed forever, and they can no longer channel velanil. Others die almost instantaneously – their bodies burn away to ash in a fiery inferno, or their body begins to turn into magite leaving behind their frozen form in stone forever.

Should the Magus be ‘lucky’ enough to survive they will suffer many other side effects of Magi-Drain and Magi-Burn which can include: Extreme fever, vision distortion or permanent blindness, tongue swelling, severe welts and/or burns across the entire body, blood coming from the eyes, ears, nose, and mouth, difficulty breathing, blackened fingertips as though they were burnt, loss of hair and/or discoloration, infertility, rapid heart rate, loss of bodily functions, seizures, and/or coma, loss of limbs, loss of hearing, vocal cords burned out.

Any symptoms brought forth from Magi-Burn cannot be healed through any magical means. The magus’ body must naturally heal. Usually the symptoms are long lasting or permanent. The road to full recovery from Magi-Burn is a long one, taking months or even years for the physical damage to heal.

A focus is an item that possesses a piece of magite embedded in it. Magite is a rare stone found throughout the realms that is the byproduct of magical energies flowing through the world. When magite is combined with an item, it changes its properties – making it a perfect object to hone one’s magic through. Magite items are easy to notice as they often have an opalescent sheen to them. This color can vary based off the main color and fire of the magite stone used in its construction.

The focus does not change one’s magic, or enhance it, but rather helps the caster to increase their accuracy and channel magic more efficiently. All educated magus are taught to use a focus that helps them strengthen their bridge to their velanil. This focus could be anything, from a weapon to armor, to a piece of jewelry, to just an orb or wand of magite.