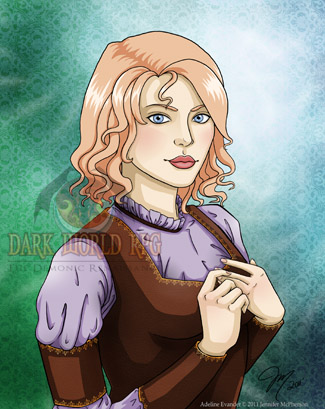 Hair Color/Style:   Strawberry blond and cut just above the shoulders, it gets gently curly as it gets farther away from the scalp.

Eyes:   Her eyes are wide, almost in a childish way. They are gray-blue in color.

Physical Appearance:   Adeline is a girlish woman by all accounts, save the athletic form years of training has bestowed her. Bouncy hair, wide eyes and pink cheeks wrapped up in a heart shaped face gives her a deceptively safe and stereotypically feminine appearance. She is very petite, often shorter than most people she encounters and her curves are gentle but defined. She is fair skinned and has a collection of freckles on her back.

Clothing and Armor:   Adeline wears a lilac colored dress beneath a hardened leather vest. The dress is short and the hem has a pointed pattern cut. The collar comes up to the neck and has thin brown ribbon around it. The sleeves of the dress are puffed. Her upper and fore arm are both covered in separate pieces of leather padding which allow another puff of the sleeve to peek through at the elbow. Around her waste is a thick belt with a rectangular buckle. She wears a pair of plain brown leggings under her dress, but they are mostly covered by her thigh high boots that match her vest. She wears a shooting glove on her left hand (she’s left handed) With a heart cut out of the fabric on the back of her hand. Her other hand has a gold ring with a heart on it. This outfit goes a long way in hiding her athletic form as it covers up her body’s muscle tone. In the summer she tends to wear a similar outfit but she ditches the leggings, foregoes the leather on her arms and just sticks with long, loose sleeves.

Weapons:   An exceptionally crafted longbow of her own making. The ends are very pointed and sharp. The wood itself is engraved with a design that involves hearts. It’s name is HeartStriker and it is all but glued to her. She also carries a simple long dagger.

Worst Fear:   Her biggest concern is that she will prove to be inadequate while on the job and allow someone to die. Being in any situation in which she is unable to get to or use her bow. This accounts for her being very uncomfortable with cramped spaces. If there isn’t enough room for her to fire, she doesn’t want to be there. She is also afraid that when she goes back home she’ll be turned away. Snakes are also on her black list, she will not hesitate to shoot one while shrieking. Also, she doesn’t want people finding out how poorly educated she is in anything other than archery, she fears being looked upon as stupid.

Personality:     At first glance, many people could quickly assume that Adeline is a hair twirling twit. Her cutesy looks combined with a girlish voice and up-beat personality package together to make a first impression that she is childish and silly. While she does carry some of the bubble gum girl characteristics, she is not that type of person. She prefers a cheerful view point on life but she actually has a good deal of common sense and practicality – so much so it can make her seem a little insensitive. Adeline is very good at accepting things she can’t change, generally shrugging them off and going straight to the ‘alright, so what happens now?’ phase while skipping over any outrage or misery. She doesn’t approve of dwelling on such things and can be sort of blunt in expecting other people to move on as well. She also has little tolerance for self-pity, as she finds time spent feeling sorry for yourself is time you could be using to find a solution and fix it. In her mind, anything can be set right as long as you keep a positive attitude. Her cheerful demeanor rarely goes over the top and is usually reigned in at the appropriate times. That said she can still be a bit much for anyone on the more serious side of the spectrum. She can also be easily distracted when she sees something she considers particularly pretty.

Adeline is playful and likes to flirt with men and tease women and always enjoys a good sport.

While most definitely hard working, Adeline is often uncertain about her prowess as an archer and can get very defensive if her talents called into question.

History:     Adeline is the second of three daughters and third of four children belonging to the Evander family. The Evanders are a long line of bow men and crafters; so long in fact they aren’t sure who the first to take up the trade was. Her father, Bevrin, was an unmatched craftsman and a superior archer, but it was her Uncle, Daveth, that trained herself and her siblings in the arts of archery. Daveth’s only child had been plagued with illness in his infanthood and it had caused the boy to be weak through the rest of his life, which was why Daveth had chosen to train his brother’s kids. Bevrin was pleased with the decision for, while he was exceptional himself, Daveth was even better as far as actually firing a bow went.

The children all started training around the same time. She was about six, her elder siblings both eight and her younger sister five. While her mother wouldn’t stand for her babies being worked to the bone at such a young age, by the time Adeline was nine archery had consumed her every moment. It left precious little time to learn anything else, and none of the Evander children learned to read or write particularly well. Still, her mother prevented the truly grueling training from starting until Adeline was twelve. This resulted in a lot of family squabbles, as her father and uncle were often over-zealous about the whole thing. Looking back, Adeline feels fairly positive her Uncle would have had her 6 year old fingers bleeding if he’d been allowed to.

For the most part, Adeline actually enjoyed the art and practice of making and using a bow. There was grace and elegance in it and it could be very relaxing and peaceful. The only downside of things was that, no matter how well she did, it was never good enough for her uncle or father. The fact of the matter was she was better at it than her siblings without trying as hard as they did. That’s not to say she didn’t work hard, because she often trained until her body failed- but her brother and sisters managed to work harder, because they were trying to keep up with her. Her father and uncle were dissatisfied with her because they knew if she worked like they did she’d be outstanding, remarkable, even by their standards. At the end of the day all their methods did, however, was frustrate and discourage her.

Adeline was nineteen when she refused to train with either of them anymore. In truth it was only her and her younger sister that were still working with them on a daily basis, her elder siblings were released from the every day obligation when they were twenty. It was her father’s threat to keep her under his and her uncle’s supervision for an additional two years (as opposed to the one year she still owed) unless she shaped up and stopped being so sloppy that pushed her to it. It resulted in a colossal fight. It ended with her father saying that if she wasn’t training, then she was past marrying age and he’d see her out of his house and making grand-children who’d probably work harder than she did. This caused her to announce he wouldn’t have the chance before she marched to her room, packed her bags and left. The scene plays back tragically when she see’s it in her memory, because she remembers her mother and sister’s plea’s for her not to go rather than her fathers angry demands.

After that she hopped a boat from Northview to Shiloan and has been making a living as hired security for travelers and wagons. It wasn’t an easy business for her to get situated in, due to her appearance and demeanor, but after a couple of free jobs, and a few very dead bandits, she earned a reputation and it’s been smooth sailing since. While she occasionally regrets leaving home, she is for the most part very pleased with the freedom in her life. She does hope to go back in another year or to and visit, but has no intention of ever returning permanently.