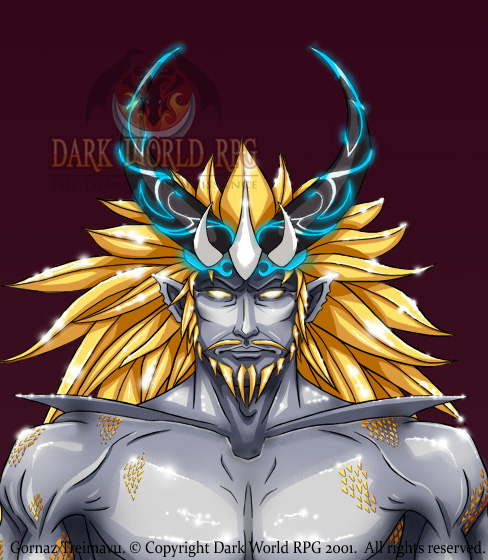 Alias/Nickname: Emperor of the Valdharian Empire, Lord of the Demons, Lord of the Athdraki
Race: Athdraki Titan
True Age: Perpetual
Apparent Age: Early 40’s
Sex: Male
Height: 8’4″ – Small Demon Form / 13’7″ – Full Demon Form
Weight: 385 lb – Small Form / 850 lb – Full Form
Hair Color/Style:Gornaz does not have hair in his hybrid form, but rather a series of long to short flexible draconic plates that are gold and shimmery. They frame his face, much like a lion’s mane, and rund down his spine and eventually taper off to the single line of gold plates linning his tail.
Eyes: Large white orbs that seem to pierce even the darkness of twilight. At times, when angered they may change to a blood red.
Marks/Scars/Tattoos: None
Physical Appearance: Gornaz is a towering and monstrous draconic beast with rigid and dark silvery scales. His eyes are forever calculative and dominant. A finely trimmed beard and mustache that is gold in color frames his face. His tail and wings are large and draconic in appearance.
Class: Athdraki Titan – Lord of the Demons
Skills: Unknown
Carried Possessions: Unknown
Clothing and Armor: Very little armor can be located on Gornaz, that what can be seen are a set of bracers, leggings, and a girth. The leggings only cover his lower legs, from the knees to the ankles. Each piece of armor is made from a demonic metal from the lands of Ishtar. The armor is metallic red in color and has been enchanted by Gornaz himself to provide further defense against magic attacks. On the bracers and leggings are clear magite crystals that seem to have no purpose other than decoration. A small red jacket of sorts that has no sleeves is worn over his shoulders. The jacket covers little and in fact leaves his entire chest exposed. A brilliant platinum crown with several wicked horns of metal rising to the sky rests upon head. In the center of the crown another magite crystal resides. An eerie and pale red glow emanated from the stone.
Weapons: N/A
Likes: The demon races, loyalty, and knowledge.
Dislikes: Traitors, demon slayers, and incompetence.
Merits: Protective over those under his control, intimidating, knowledgeable, and oddly kinder than most demons.
Flaws: Overconfident, critical, and more tolerant of the calamian races.
Worst Fear: The extinction of his people.
Personality:   Gornaz is a mysterious being in all aspects. He is highly intelligent and at times tends to be rather domineering. Knowledge is power. Should he find a use for a person, whether they are demon or even a Calamian, he will not hesitate in using them to further his plans. Many demons dislike the fact that he allows humans to join them; yet continue to follow him nonetheless. Unlike the former Lord of the Demons, he has not shown as much aggression towards the humans as to wipe them out from existence. However, his people are his top priority and will do anything to ensure their survival.

History:   During the times of the first Demon War, Gornaz was the second in command. With his aid, along with several others, Jeremas and his minions had easily taken over Calamia. Around the final battle of the war, however, Gornaz left the demon army. The reasons for this are still unknown as of yet.When Gornaz received news of Jeremas’ defeat, he returned to the demons and began to rebuild the demonic forces. With his return and taking claim of the position of Lord of the Demons, the demons morale was once more restored. Many years were spent regaining even a portion of their former strength.

Over the years Gornaz began to prepare the demon army for another assault upon Calamia as well as devising a plan on freeing Jeremas from the magical prison which the humans had placed him in. The answer to the latter came in the form of a sinister man who called himself Derrek. He explained to Gornaz about the Talismans of Power and how when combined and reconstructed formed the legendary artifact God’s Eye. This artifact alone held the power to shatter the walls that bound Daishevar (Daishevar is the name the Calamians had given to Jeremas after the first Demon War).

With this new knowledge of God’s Eye Gornaz sent his agents into Calamia to find these talismans that Derrek informed him of. The search had taken many a year, but at long last one of the talismans was located in Rionia, the capital of the Kingdom of Auraton.

Gornaz continues to have his minions scour the lands of Calamia for the remaining four Talismans of Power. Should the Lord of the Athdraki obtain them all and reform God’s Eye, the world will once more be plunged into the sea of darkness as it had thousands of years ago…