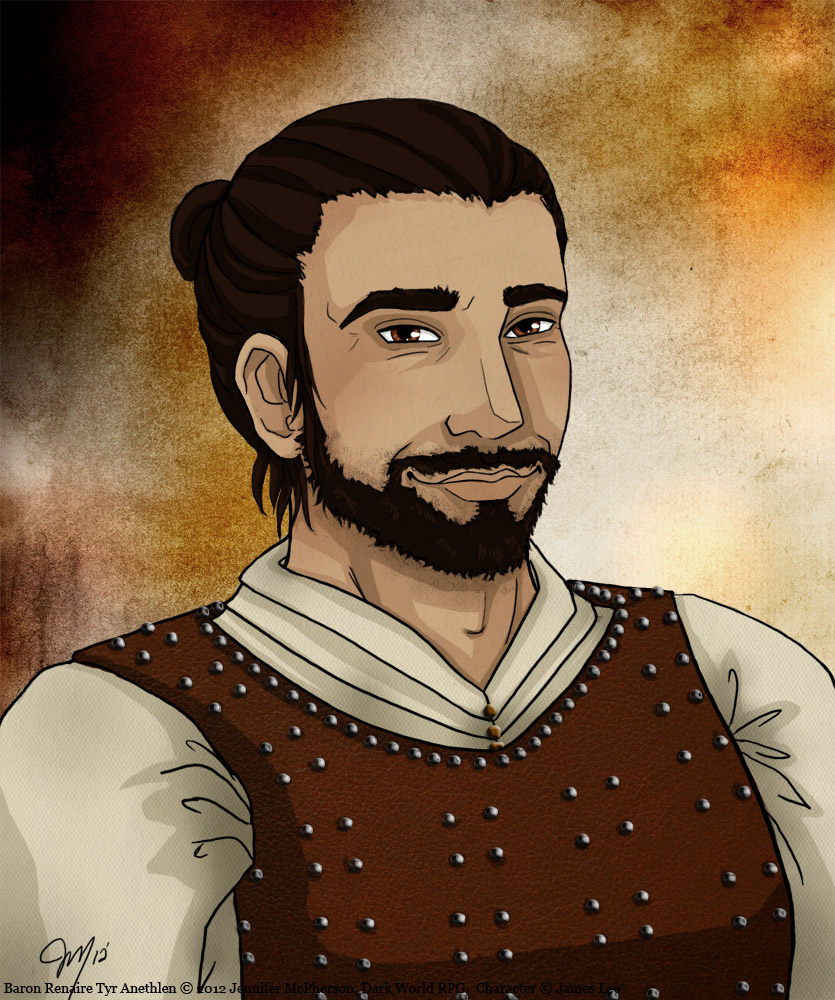 Physical Appearance/Clothing/Armor: Renaire is short and rather stocky with a deep, barrel-like chest. He has dark, fine hair (brown bordering on black) that is bound tightly in a knot at the back of his head, heavy eyebrows and a patchwork beard that runs unevenly over his face (meaning that in some places the beard grows and looks full, but in others the growth is thin or bald). Overall, he has a weathered appearance with rough, calloused hands and a thick, heavily muscled torso. His eyes are brown and he has farmer’s tan – arms, face, and other exposed areas looking sun drenched while his chest and legs look paler.

Basic Persona: Renaire is very gruff, blunt, and egotistical. He has a tendency to be judgmental and very candid with his opinions. This often makes him sound tactless in conversation and some women find his attitudes sexist. Still he has a general idea of right and wrong and, despite being lewd (usually in his mind), he does have some respect for women of station. He’ll humor a female companion, judging her based on her conduct, but rarely takes a woman too seriously. Around men he’s either aloof, aggressive, or quiet and will challenge their masculinity to make himself look superior. Inwardly, however, he’s very insecure, lacking both self-esteem and an overall direction in life. He compensates for this by puffing up his deeds. This gives him an inflated ego and, as a result, when his self-image feels threatened or he becomes argumentative, he acts aggressive, obstinate, or asinine.

Basic History: Renaire was born in southern Thelahar in 3092 ADW, just outside the port city of Faldarlin. His father – Lord Kestren Anethlen – was a local baron, one of the many military men who helped shape the merchant state of Asentia during the late 3070s. Renaire grew up in a broken home. His mother – the light of his young life – died of disease when he was six years old, leaving him and his two-year old sister Marie alone in the care of their father. Lord Kestren, who’d never been a gentleman took to drink after his wife’s death and, while he coddled little Marie – the living image of her mother, he laid great expectations on his son. Renaire could do nothing right. He grew up with harsh criticism and little support.

When he was fourteen Kestren shipped him off to the Citadel of Urathel, then controlled by one of his former military comrades, to be trained as a soldier. Here, he was exposed to the harsh realities of combat – fighting orcs and bandits in order to defend the border farms surrounding Faldarlin. His father died when he was seventeen, passing the title to Renaire, but the boy soon discovered that his father’s lands was heavily mortgaged. Kestren had enjoyed his later years whoring and gambling in Faldarlin and his debtors came calling before the body was even cold. The estate was lost and Renaire, wanting to maintain his sister’s safety and reputation, established her in a townhouse in the city. Unable to obtain common work, he went with the only occupation he knew – serving as a tower guard at the citadel.

In 3112, the Dominion flooded Faldarlin, taking over the citadel and Renaire, hoping to save his position, joined the organization as a private. He was promptly shipped north to join a new legion and then sent out to Shanar. Marie remained behind, supported by his monthly pay, and then wrote him in 3115 to say that she’d gotten married. Her new husband, however, looked poorly on the Dominion and thought little of a soldier who’d leave his sister without a chaperone. Scorning his brother-in-law, Marie’s husband forbid any further communication and Renaire hasn’t been allowed to see her since.