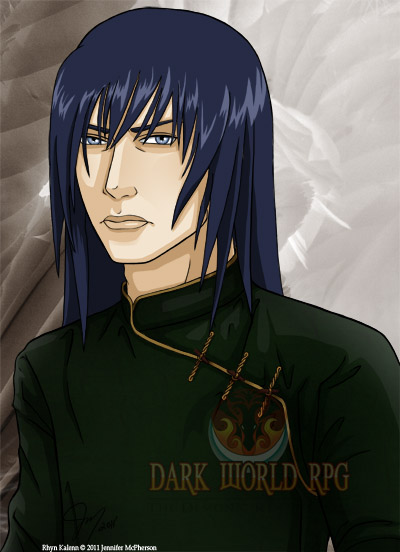 Hair Color/Style:   Rhyn’s hair is a dark bluish-gray in color. In length, it reaches to the middle of his back. He allows his hair to hang as it pleases, often obscuring the view of his face.

Marks/Scars/Tattoos:   All that remains of his wings are short bony stumps.

Physical Appearance:   Rhyn’s celestial heritage granted him sleek and handsome features, pale unblemished skin, a wiry, well-proportioned build, white wings, and light sky-blue hair. Events took away his wings, and time darkened his hair and his skin. Rhyn has the look of a man bearing a heavy burden, but not in the literal sense. When required, he demonstrates exceptional grace and poise, but otherwise hides it. At rest, his gaze tends to slip from wandering aimlessly to staring at something distant, although when directed, it can be decidedly sharp. His celestial aura is almost always suppressed.

Carried Possessions:   Rhyn carries basic survival gear and a few odds and ends that he might need. His most prized possession is a red ribbon tied around a white feather. The ribbon belonged to a long lost friend, and the feather was saved from his wings. Both are extremely old and fragile, so he handles them rarely and with great care.

Clothing and Armor:   Rhyn wears a bandage-like wrapping around his torso to tie down the stumps of his wings. Over that, he usually wears a long-sleeved, high-collared shirt that ties at an angle across his chest. His pants are made of sturdy cloth held up by a leather belt and tucked into black leather boots. A wrap-around, soft leather sack rests diagonally across his chest and back, serving the dual purpose of hiding the stumps on his shoulder blades and acting as a carryall. A long, grey cloak completes his outfit. Rhyn’s clothes tend to be old and tattered from long wear. Rhyn wears custom-made bracers decorated with a swirling cloud motif. His magite stones (one Holy and one Wind in each bracer) are tastefully integrated into the cloud design.

Weapons:   With over twenty-five hundred years of training and experience, Rhyn is a master martial artist and a specialist at using magic to enhance his physical abilities and fighting techniques. In his younger days, he carried a spear, but now he prefers to fight empty-handed.

Worst Fear:   To be the cause of more innocent suffering and death, or worse, to fall into corruption and become a monster.

Personality:      Rhyn feels that many lives were needlessly lost or irrevocably changed because of his actions, and so he’s spent the majority of his life running from his own guilt. While he has come to realize that life is full of gray areas between good and evil, he has yet to forgive himself for his own mistakes. He wanders the world like a vagabond and tries to help where he can. However, he worries that despite his good intentions, those he encounters may still suffer. As a result, his aid often comes in unexpected and less than obvious ways. The motivating force behind this behavior is the inner conflict between his drive to serve the Light and his desire to avoid causing any more unnecessary misfortune.

In conversation, Rhyn is eccentric; often straightforward and blunt, sometimes subtle, sometimes giving the impression that he’s mad. He dislikes prejudice in others, but he’s prone to exhibit a sense of superiority himself. He’s had a lot of time to get over the loss of his wings, but he still hides them. Insulting Rhyn in reference to his lack of wings is a good way to get under his skin, although he may not show it.

Over time, Rhyn has picked up many Calamian customs and terms, including their tendency to refer to Gornaz and his followers as demons. While he’s not a demon hunter, such troublemakers are a sore point with Rhyn. If he happens to hear about demon activity, he will try to investigate and may take matters into his own hands.

History:      Rhyn Telar Kalenn was born in the year 604 ADW. He was an inquisitive child with a keen mind and an eager heart. He studied hard as a boy, outpacing his peers and demonstrating great enthusiasm in both physical and academic endeavors. As he matured, some of his teachers viewed him as a prodigy, but their praise only served to fuel his youthful arrogance. In truth, though he was quick to learn, he was just as willing to question and eager to show off. As he grew older, he openly challenged the teachings of his instructors on more than one occasion, much to their collective chagrin.

When the Hope Slayer declared war on the celestials in 764 ADW, Rhyn committed himself to the defense of his people by joining the celestial army. First hand, he learned the harsh realities of war. He took lives, lost comrades, and faced death on many occasions. This tempered his attitude somewhat, but not his ambition to be the best. At times, he despaired, but with the help of his comrades, he persevered, eventually earning his own command. His unit completed many missions during the war against the Hope Slayer, eventually becoming a well-known detachment in the celestial army. This onset of glory fed Rhyn’s ambitions further, but his good fortune would soon come to an end.

In 880 ADW, the Hope Slayer set a trap for the celestials, and they took the bait. Rhyn’s unit was deployed along with the bulk of the main army to help fend off a supposed attack. While on route, they encountered a small contingent of Derrek’s forces apparently in the midst of a ritual centered on a dark, fist-sized orb. Rhyn felt that the ritual, whatever purpose it was meant to serve, had to be stopped, so he ordered an immediate attack. The enemy’s numbers were relatively few, and with the element of surprise on his side, Rhyn believed that his troops would prevail.

The battle went well at first, or so it seemed. The Valhardian troops were in disarray, and Rhyn’s forces were gaining momentum both in the sky and on the ground. Then a portal opened suddenly, taking the celestials by surprise as enemy reinforcements flooded onto the field, their trap sprung. Rhyn spotted the glowing orb in the hands of an athdraki sorcerer, so he tried to take it in an attempt to close the portal. As he struggled with the mage, Rhyn’s outnumbered comrades began to fall. Finally, Rhyn managed to take the orb, but another athdraki flanked him and struck a mighty blow that crushed his wings. Rhyn fell from the sky into the now unstable portal, which transported him to Calamia. He would never again return to Israidius.

Over the following millennia, legends grew around him, but the stories inevitably changed as one person told another. In some, he was said to be mad. In others, he was a saint. A few even said he was a fallen angel in disguise, repenting for past sins. All the stories told of a mysterious wanderer who changed the fortune of those he encountered, sometimes for good and sometimes for ill.

Note: The story of Rhyn’s arrival in Calamia and his adventures thereafter can be found in game.