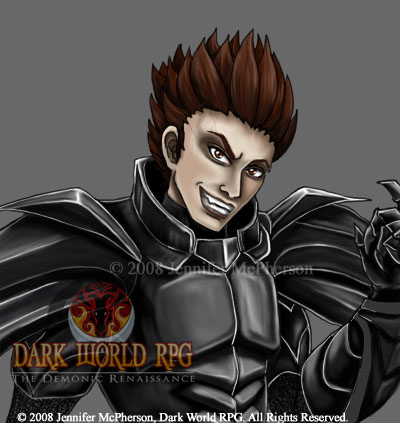 Carried Possessions: Unknown
Clothing and Armor: A full suit of armor made of a mysterious metal that is as black as night.
Weapons:A mighty longsword with a cursed black blade. Those struck by the cursed blade become deathly ill or die within days without the proper treatment.
Likes: Destruction, chaos, death, manslaughter, pain, hatred, and sorrow.
Dislikes: The Divine One, followers of the Divine One, every race, and happiness.
Merits: Pain has no effect on him, powerful magic, master at swordsmanship and military tactics.
Flaws: Completely and utterly insane, kills allies and foes without any remorse, plays with his opponents during battle, and loyal to nobody but the Dark One.
Worst Fear: His greatest and only fear has already come to pass.
Personality: Psychotic and insane in every aspect possible, Derrek holds no respect for any form of life. He inflicts pain and agony unto others to feed his never-ending lust for destruction. To deal and receive pain is his passion and love. Hating all living beings and loyal only to the Dark One, Derrek will kill even a fellow ally while having a smile on his face.

History:   Throughout history, the Hope Slayer’s dreaded name has been recorded. He is known for only the mass destruction and waves of death he has brought forth upon the land of Calamia. A general under the mighty Demon Lord it is unknown as to why the fiend works for Gornaz. It is a mystery as to where he derives his inhuman power and youth. Wanting nothing more than the complete annihilation of Calamia, it was Derrek who had brought forth the end to the mighty cities of Rionia and Shedrion, and is the sole cause for nearly making the Celestial race extinct.