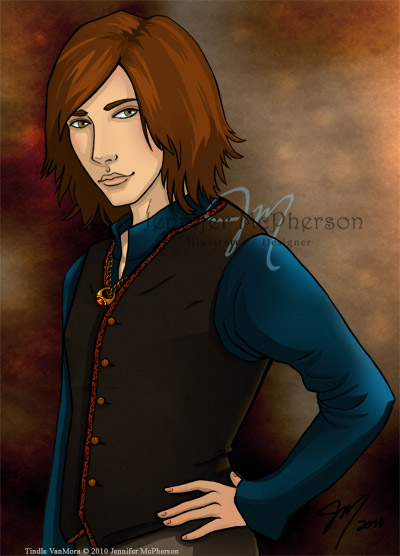 Hair Color/Style:   Golden Brown thick locks that are cut choppily and hang to about her shoulders. She parts her hair on the left side, with no bangs.

Eyes:   Hazel- A vivid green with a bright splay of honey gold around the pupil.

Marks/Scars/Tattoos:   A series of minor scars scattered over her body. Major scars include; muddled skin discoloration and light scarring around the wrists (from metal shackles), a puckered pink stitch mark on her right thigh from an arrow, a series of knitted stitch scars and skin discoloration on her left shoulder where an orc bit into it and from an arrow that pierced and came through the front by her clavicle bone. Tindle also has a small black tribal tattoo type mark above her right breast where Shade healed her wound, that is looks very similar to the fire magite symbol if flipped upside down.

Physical Appearance:   Tindle is no elegant delicate female. Her body is muscular, though not bulky, and well toned, giving her a very athletic and lean look. Built for strength and endurance Tindle is in every aspect physically fit. Her skin has a naturally tan tone, which gives her flesh a warm healthy glow. Her breasts are not overtly large, about a b-cup.  Her face is heart shaped, with a long straight nose, oval shaped hazel colored eyes with thick lashes and average shaped lips. Tindle’s physical appearance lends her towards an androgynous appearance; Tindle can look pretty and quite feminine at times, while sometimes she can also come across as boyish and masculine.

Clothing and Armor:   Tindle tends to wear simple loose clothing, preferable cotton tunics and blouses. Her pants are not too loose and not too snug, that are held up with a simple leather belt and tucked into her boots. Her boots are soft deep red leather that comes up to her knees. She’ll often wear a dark colored cloak in colder weather. When fully geared in her armor she wears a pair of dark red leather gloves and a men’s style silver colored breastplate with a gold hawk in flight etched on the front. With this she wears a belt with small hip guards, bracers, pauldrons, ankle and knee guards, all of the same make as her breastplate. Under the breastplate she wears a dark red leather vest.

Weapons:   A long sword which was purchased for her by Xeno in Ise. It is a well crafted sword, with a long double edged blade, claw like cross guard and a claw like pummel. The pummel has a slot for magite, but since Tindle doesn’t use magite Xeno placed his blue gem stone, that came from his ruined dagger, in it instead. The stone is an alchemy item, and gives the sword’s user a very slight boost to their mental focus.

Worst Fear:   Dishonoring her family name, being weak and useless to those around her. Khahadi. Orcs are a super touchy subject with Tindle, even hearing the word makes her stomach twist. If she sees them, hears them, she gets extreme anxiety and can experience a multitude of symptoms (vomiting, jittering, nausea, sweating, shortness of breath, pounding heart, etc) – which in turn makes her angry, and inevitably triggers her rage ability. She has recently gained a deep set paranoia of underground crypts.

Tindle has a very big heart, although it doesn’t always show. She has a wry sense of humor, an infectious smile and a presence about her, a sort of magnetic charm that people can relate to. Tindle tries to give most people the benefit of the doubt, making her a bit soft-hearted, which has caused her trouble on more than one occasion. She is still somewhat naive, having very little worldly knowledge. Despite this she is smart and can learn relatively quick.

Tindle does have insecurities about intimacy, based on her traumas in Fardarlin and with Khahadi. So she tends to ignore or avoid affections unless she’s confronted directly, because she’s unsure how to handle it. She is very self critical, and will beat herself down more than she should. This particularly stems from her father’s expectations, and his desires to have a son. Tindle will close up when she is emotionally over-loaded, avoiding others and being generally quiet. However when pushed or cornered she can get extremely angry, even violent.

She hates it when people try to protect her or make decisions for her, for she wants to show she is capable. This has proven to be a very difficult issue for her, given she’s had many instances where others have wrestled control of her life from her hands. Tindle struggles with her identity; the boy her father wanted her to be and the girl she is. Tindle wants to prove she’s just as good as any son; however deep down she just wants to be accepted for who she is.

Hestus VanMora moved to the city of Rionia with his family when he was a child. Hestus grew up in Rionia’s walls. Hestus, when he became of age, joined Rashnal’s army and eventually became the Captain of the Rionia Guard when he was twenty-five. About ten years into his service he met Elayne. She was the daughter of a wealthy merchant and an educated woman. Hestus courted her for a year before he asked for her hand in marriage. With his service to Rashnal completed he took his pension and his wife and move north to the village of White Springs. They purchased the inn and fixed it up.

Happily, Tindle Lorelai VanMora was born on Icedawn 4th, 3099 ADW. Tindle’s infant years were pretty happy, although she does not remember them. Yet due to Elayne’s health she was unable to give birth to more children. This created a growing sense of bitter resentment for Tindle’s father, as he was one of the last in an old family line and he wanted a son to carry on his name. Now he could never have one. So he placed a lot of his desires and expectations for a son on Tindle, attempting to make her into the son he always wanted. Tindle grew up in the village and was an energetic and helpful child. She did many things around the inn to help her parents, like carrying and stacking supplies, chopping firewood, and helping out in the kitchen.

Tindle was eight years old when Rashnal went to war with the northern nations. Hestus was too old at the time to rejoin the military, although he helped house soldiers as they traveled to the front lines. Growing up with military presence made a lasting impression on Tindle. With the war at her family’s doorsteps Tindle’s father made her practice the sword, ‘just in case,’ he would say. He was not an easy teacher, and was quite harsh at times, but Tindle soldiered through, if anything to obtain her father’s approval and praise. When she was not learning with her father, her mother was teaching her basic cooking, mending, and how to treat minor wounds.

From youth she wasn’t like typical girls, into dolls, sewing, music or art. Her father discouraged it, told her to toughen up, be strong, and put away childish things. Despite this Tindle was a dreamer, partly encouraged by her father’s influence, she always thought of adventures, loved the stories her father would tell her of Rionia and his time there, and the stories she’d hear from the army regiments as they came through. So whenever she had spare time she would instead be out running in the fields, climbing trees, and playing in the forest. Tindle would often pretend she were a knight, a soldier or a hero fighting enemies, rescuing the princess and saving the world.

In her early teens an unexpected encounter with a demon and the accidental burning of their family’s store house would change her in many ways. Her father blamed her for the fire, and swore that if she was a boy it would have never happened.

And so Tindle spent every day since trying to make up for it, to be the boy her father wanted. Her indifference in girly things grew, and she would often hang out with the boys around the village. She became a rough and tumble sort, a tom boy, and even gave the boys a few shiners, her infamous fiery hot temper sparking to life. She became somewhat infamous, but not bad as per say. Some found her charming and amusing, while others thought she was unruly and wild. However she proved she was capable, working hard, and showing she was just as good as a son. Yet deep down she knew it would never be enough.

The years passed, and Tindle was now nineteen. The war in Auraton was over and their town was celebrating along with the rest of the now united kingdom. The festivities were beginning to take their toll on stocks, so her mother sent her on an errand to get some herbs she had run out of. It was a good half hour walk to get them, but she had been there many times before, so Tindle took her time and enjoyed the fresh air and freedom of the outdoors.

However, when she returned everything was destroyed. The village was in flames, and the bodies of soldiers and those she knew littered the ground. Tindle found her father’s broken body surrounded by some dead orcs just outside the inn’s rear door. Her father had fought bravely, but there had been too many. Her mother’s body was just behind his… their hands clasped loosely together, as if they reached out to each other with their last breath. Tindle clutched their bodies and sobbed for hours.

Once the tears stopped falling she dug a grave for her mother and father behind the inn. As she set them into the earth she removed the large ring from her father’s finger, her house symbol of a hawk in flight. Saying a prayer she buried them together. Alone, afraid and heartbroken Tindle fled her home with what little she could find.

This is where Tindle met the legendary demon hunter, Xeno. Some would call it an accident, she calls it fate. She began to follow him, uncertain of where to go, and practically forced him to teach her more about fighting. He tried many times to get rid of her, but she was unnervingly persistent. Now practicing the sword as Xeno’s apprentice, Tindle has traveled a long way since that fateful day in White Springs, into northern Auraton, parts of Lagunis and Thelahar. She’s seen and experienced horrors many wouldn’t believe, met people of good and ill nature, and seen and felt the effects of war first hand. And so her story continues…

Note: Tindle’s exploits after leaving her home can be read via the Dark World RPG forums.