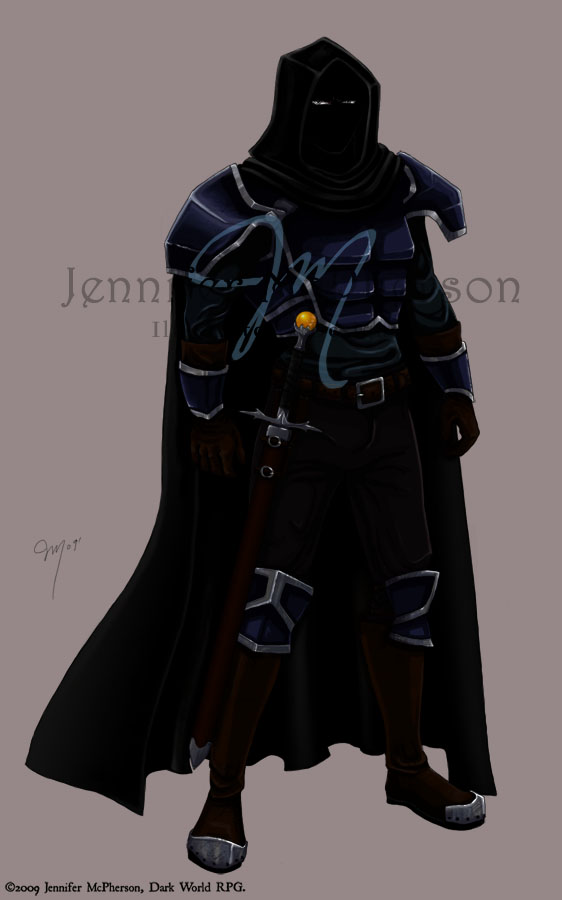 Marks/Scars/Tattoos:   Unavailable – Every inch of his body is practically hidden.

Physical Appearance:   The true appearance of Xeno, aside from what one can see of his clothing and armor, is a complete mystery. A strange sheet of darkness, acting almost like a second skin to him, covers every inch of his flesh. Even with the features of his face practically unable to be seen, he rarely takes the hood of his cloak down in front of others, keeping his face hidden from prying eyes. Xeno holds a pristine physique, large and muscular .

Carried Possessions:   A small and enchanted bag that is able to contain more contents than normal. Inside this bag are the majority of his possessions and ryn. Another small leather pouch hangs alongside his belt as well. This pouch contains an orb that is able to produce an eerie blue light when an ancient incantation is spoken (abilities unknown). A piece of what appears to be refined magite also lies within this pouch. This stone was in fact a gift to him from Vivien De’Saide, an item once belonging to her brother Lance. The full properties of this enchanted piece of magite are unknown even to Xeno. The only ability that he has been able to access from it is to release his energy within into a deadly attack wave. This process is nearly identical to the use of a raw magite, potentially able to instantly destroy the user’s body. The final item in the pouch is a small blue gem that once sat in the pommel of his dagger lost during the battle of Rionia.

Clothing and Armor:   Everything about Xeno is shrouded in darkness, including his very outfit. The pants and shirt he wears are a slightly faded black, bordering gray almost. He dons a black breastplate and pair of shoulder guards that are black, giving off an almost blue shine in the sunlight. The metallic boots he wears are also of the same color and covering his hands are a pair of black gloves. Draped over his body is a thick and hooded cloak, a shade of black darker than all the rest of his gear. Beneath all the clothing and armor a strange substance covers his entire body that holds a texture is similar to skin. This strange covering provides no protection against attacks whatsoever and is used by Xeno merely to mask his appearance.

Weapons:   A longsword made of a rare metal from the dark lands of Israidius. Resting on the pommel of this magnificent weapon is a large yellow gem. The sword itself holds no true magical properties, but nonetheless is capable of withstanding and dealing great damage without receiving much wearing to the blade. This effect is actually due to the stone within the pommel, allowing the item it is attached on to last and endure more than usual.

Dislikes:   The Valdharian Empire and Emperor of the Demons. Grevis. Demons in general. Excessive talking. Being touched. Being in closed-in spaces too long. People incapable of making decisions for themselves. Placing trust in people. Getting a personal attachment to a person or thing. Cowardice. People that try and get in the way of his goals or that openly question his methods in dealing with matters.

Merits:   Extensive knowledge of the demons and ancient languages. Master swordsman. He is strong and swift, and holds tremendous endurance. Seems to have an above average recovery rate. Observant.

Worst Fear:   Becoming a prisoner of the Empire once again. To never get revenge for what the Empire and its Emperor has done to him. To lose someone that he has become close to.

Personality:      Living and breathing only for the purpose of slaying demons. Xeno cares not on how the task of doing so is done, just so long as the task is completed. He is cold towards all those around him. Rarely does he ever speak more than what is necessary. Emotions are things that get in the away. Personal attachments toward other people or creatures should not be made, for in the end they will die just as all others he had grown close to have. This is what Xeno truly believes.

Xeno tends to withhold information to those around him, unless given no other choice but to tell or is absolutely necessary. Those times when the matter concerns a person matter for him, he will avoid speaking about it. His past is something he desires not to speak about. He also finds it difficult to trust anybody, including the small handful of people who have actually managed to break down the walls and gotten close to him.

He loathes those he views as weaklings. To him a weakling is not a person who is physically inferior. Rather the term of weakling is defined by their actions and how the person deals with any given situation. To lie down in defeat without giving it your all is unacceptable. Cowardice is not tolerated. A person should make their own decisions in life and become their own person. To face the unknown, even when all odds are against you…now that is something worthy of his respect.

His hatred towards Gornaz is absolute, dedicating his entire existence in bringing down the Titan and the Empire. There is only one other being that Xeno despises more than the Emperor of the Demons: Grevis, head inquisitor of the Empire.

History:      Countless legends surround the Silent Warrior. Stories of valor and tales that could send chills down the spines of grown men have been told for centuries of the mysterious demon slayer. What he is exactly, nobody knows. Some believe him to be the very spawn of Molrivath, others, men who simply took the title over the years. What people do know is that where he goes, demons and misfortune follow close behind. As so this has constructed quite a record of infamy for the one named Xeno.

In the year 3119 ADW, it was reported that the Silent Warrior made an appearance in Rionia, the capital of the Kingdom of Rashnal. A day later the great city and kingdom fell from an onslaught of demons lead by the fearsome and mythical being known as the Hope Slayer. The Kingdom crumbled within a single day. Ironically enough, it had been only several years before that it was said the Kingdom of Rashnal had hired the Silent Warrior as a mercenary during the War of Unification.

During the fateful day that Rionia fell before the barbaric demon army, Xeno encountered the Hope Slayer within the castle walls. It was there Xeno took the Talisman of Peranicus from the Demon General and escaped through an abandoned underground tunnel system with a woman named Ryana. Within the dark passageways they encountered an ancient beast known as Metuvaq. Barely they defeated the creature, if only for a brief moment, before fleeing further into the tunnels.

After leaving the tunnels he encountered a young human girl named Tindle. Around that time several other people appeared, including Silver, Otaka, and Lilith. Though displeased with traveling amongst a group so large, he traveled with them for a time. Making way to the continent of Lagunis and then the capital of Narovia, he parted ways with his fellow travelers and met with an old friend: Vivien De’Saide.

Through her Xeno discovered the true plan Gornaz had…to free Daishevar, the original Emperor of the Demons, using the power of five talismans. The talisman he took from Derrek was the first. Combined with the other four talismans, they would create the artifact known as God’s Eye. With this information Xeno found a true purpose and goal to his life, and so set off to find the remaining four talismans.

With the help of Dorian he discovered a possible location for another talisman. Afterwards he gave the Talisman of Peranicus to Dorian’s twin brother, Evirion, knowing that it would be safer with him. Afterwards Xeno met with Vivien once more before setting off on his journey. This was where Tindle located him again and began following him, determined to receive training from him.

Through her sheer determination she had managed to gain the respect of the Silent Warrior. Since that day he has been teaching Tindle swordsmanship. Continuing on his journey, with Tindle close behind, they made their way to Thelahar where the next talisman was said to be.

With each passing day darkness spreads further across Calamia. Only time will tell if Xeno and his comrades are destined for victory or defeat…