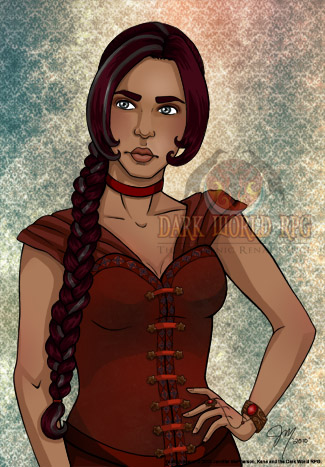 Hair Color/Style:   Dark brown-raspberry, drawn to the right and braided. The rope of hair falls about mid back but is usually hanging over her shoulder and down her front. Two thick sections of hair are cut short by the sides of her face and curl at the ends by her cheeks. Her hair is held by two red bands. Her hair has recently aquired 3 noticable gray streaks from pushing herself to hard in a battle against the undead.

Marks/Scars/Tattoos:   Light scars from general life, not of any particular note.

Physical Appearance:   Yadira’s skin is tan and her body structure simply bulkier than most for some reason. She’d not fat or even pudgy really..just a bit big and slightly on the square side for a woman. Her curves are fairly generous with a C for her chest and ‘cushin for the pushin’ in the back as she was once told. Her face is short and heart shaped with a large forehead, a flat rounded nose, defined cheeks and very rounded lips Her eyebrows are a little to thick and though she’s generally got an ever lasting baby face it’s somehow still incredibly stubborn looking. She’s not stunning but she manages to pull off being average. Could possibly make it to pretty if she took the time to fiddle with make-up and tweezers.

Carried Possessions:   Basic needs and a gold comb with elaborate fruit flowers decorating the handle and a single tiny gem.It was a gift on her 16th birthday for becoming a woman, given to her by her mentor and lover.

Clothing and Armor:   Yadira wears a snug halter top that comes down just a few inches below the hips. It’s dyed red, cut to accentuate her breasts to round her body more. Closes down the middle, the fastenings molded as flowers and done in burnt orange. Under the top is another top in a earthy clay color. It covers her shoulders and disappears beneath the over top until it peeks out at the bottom. Her forearms and palms are covered in wraps of the same color. On her legs are sturdy mud brown Capri pants with the stitching showing. On her feet, coming up to just about where her pants end are ebony wood brown boots. Her jewelry is simple. Earrings designed in three small spheres (one on top two below) in red, a red choker and her bracelet’s. One is set with her holy Magite, the other a regular stone, both oval and red. The bracelets also connect down to a ring on each hand.

Weapons:   A war hammer with flowers engraved into the stone on top, the hammer part being smaller than usual so she can wield it with more ease. Embed ed in it is her earth Magite.

Likes:   small creatures (includes anything below her chest line), gardening, spring, learning, teaching, being right, being in charge, Fedroa

Worst Fear:   losing the favor of her Goddess through her own actions.

Personality:      Yadira is….well she’s not a cloud of sunshine and fluff. She has a love of children and small creatures and in their presence develops a very motherly way of being in which case she’s actually very fun. Put her around those her own age, however and she becomes a sarcastic smart-ass. She’s strictly against sugar coating anything for peoples above the age of fifteen, she has no tolerance for silly social games or dim wits who ‘waste’ her time. That being said she’s not the easiest of people to get along with at first but as she begins to trust and respect you, she softens and you notice that even if she’s not a bowl of sweetness she’s not a complete sour lemon either. She may break bad news badly but she’s not half bad at putting it in a better perspective and even if she’s mouthing off, what she says is pretty funny when you learn that it’s not really you, it’s just the way her temper is. And when she behaves badly she usually makes a note to apologize when she’s calmed down.

Yadira can be very judgmental and even fairly prejudice, but she does try to keep it to herself and not let it effect her duty to help people, even if these ‘people’ aren’t exactly ideal.It’s a part of her ‘I am better than you’ complex which she openly admits is a problem. It’s something she’s been working on and making progress towards.

History:      Yadira comes from a noble family filled with males. She grew up as the only girl in a gaggle of brothers and male cousins, torn between being the girliest of the girly ( to make up for all the testosterone) or a tom boy so she could play with her siblings. During that phase of her life she was given a great deal of attention from much of the family but one uncle in particular shone brightest among the rest. Her Uncle Evrette was, as it were, still childless as she was growing and poured his love and affection into his niece. It was a spotlight she reveled in until, when she was seven, he finally did have a child…a little girl, as it were. Suddenly her status as the sole girl child was gone and everyone was fawning over the newborn. Yadira didn’t like that, but contented herself with the fact that newborns were always a big deal and the effect would pass. It didn’t. Her little cousin was prettier than her, did cuter things than she did and continued to suck up the attention of the general family. Which she could have dealt with but her Uncle, her favorite person whom she loved more than even her parents, stopped coming to see her. Over the course of a year and a half she saw him but three times and always with his attention fixated on his little girl and pregnant again wife.

Naturally, Yadira lashed out. Her behavior became most atrocious. Foul language spewed from her eight year old mouth, she broke things and climbed and leapt from things, she rolled about in the mud in expensive clothes, terrorized household servants, disrespected her parents and, the straw that broke the camels back, knocked one of her older brothers across the head with a chunk of wood so hard his head split open.

Her parents were at they’re wits end when a Cleric named Taddeo dropped in. He and her Father had becomes friends from far before Yadira was born and Taddeo was heading back to his monastery for a rest after years of wandering. It had occurred to him to drop in on and old friend along the way and upon hearing about their trouble with their young daughter, and then witnessing himself how far their desperation for discipline was driving them to treat her, he offered to take Yadira and care for her for a short while.

This brought on the silent treatment from Yadira. She refused to acknowledge Taddeo at all and did so until they reached the monastery when she then threw a fit. Which only succeeded in working her up more because Taddeo merely talked over her and pretended she was still standing quietly by his side. His method continued in that manner. He was never harsh or lifted a hand to her. Never rose his voice. When she threw fits he ignored her, if she wanted something she either worked for it or didn’t get it, which she learned right away. He was incredibly patient in teaching her and good at rewarding her when she behaved well.

In five months her attention needing bad habits were gone and Yadira was eating out of his hand. She learned appreciation, some form of patience and self-lessness.Though he had never pushed it on her, she was asking for lessons and direction in religion and finding herself ensnared.

By the sixth month, when she was nine, Taddeo was very fond of the girl himself but he knew he aught to be sending her home to her family. But when he mentioned it Yadira begged him to let her stay.

“I want to be like you.” she pleaded. “I want to learn more, I want to be able to serve the Goddess, keep me, teach me, please Taddeo..”

Taddeo was moved and, of course, thrilled that the young one would wish to do as he but she was young and what do children know of what they want? Yet he really didn’t want to send her back and was worried she’d feel he was abandoning her and relapse back into her bad habits. So he wrote to her father and told him of the events..and surprisingly enough, or maybe not depending on your point of view, her father said she could remain.

And so she did. She would be disappointed that Taddeo was still to young himself to be her teacher but he did remain at the monastery to be her care taker. She began following The goddess Fedroa and as she proved herself was sent to receive and learn the ways of Magite- first light and then she picked up on earth. It was at 22 her light Magite became holy, through her dedication and ceaseless training.

But twenty-two was a great age for Yadira for another reason. It was at sixteen when she began looking at Taddeo in a new light. The light in which a woman looks at a man. She spent 4 years trying to get him to look at her as a woman and another two convincing him there was nothing wrong with it even if he was twice her age. It was at twenty-two they became lovers but..for reasons Taddeo would never reveal to her he never married her.

The truth was Taddeo found his interest in a girl he raised to be the most sickening thing he had ever thought of. He had hoped that satisfying the fantasy would extinguish his passion and let him move on from it. When it only fanned the flames he was most disturbed. Especially when he couldn’t help but think about how much her body had changed from when he had bathed her as a child. He knew Yadira wouldn’t accept such a reason for him to with hold the feelings he had….he was left with one option. On her 23 birthday he picked up and left, with no word where he was going or if he would ever come back.

Yadira was crushed. She waited a few months before giving up hope and turning to drinking. It was a turbulent time and she shut herself down so much she very nearly lost her favor with the Goddess. Her friends there performed an intervention then, locking her up with just water, three meals a day and constant visits and chats to try to get her to move on. It eventually worked and She then took off to wander, needing to get away from the memories and clear her mind.

She’s been on the move since.